Tested on:
If the instrument cluster is Denso, only EOL coding is available

The CAN-Coder software is used to program the KIA\HYUNDAI vehicle control modules, like as Instrument cluster, BCM.
CAN-Coder is an additional option for CAN-Hacker 3.x interfaces and is a basic option for CH-OBD.M02.
Activation of the option is carried out using the UBT program. The activation key is provided when you purchase an option.

CAN-Coder is developed for experienced users and owners of KIA \ Hyundai cars. CAN-Coder is delivered “as is”. The user is solely responsible for the results of using CAN-Coder. 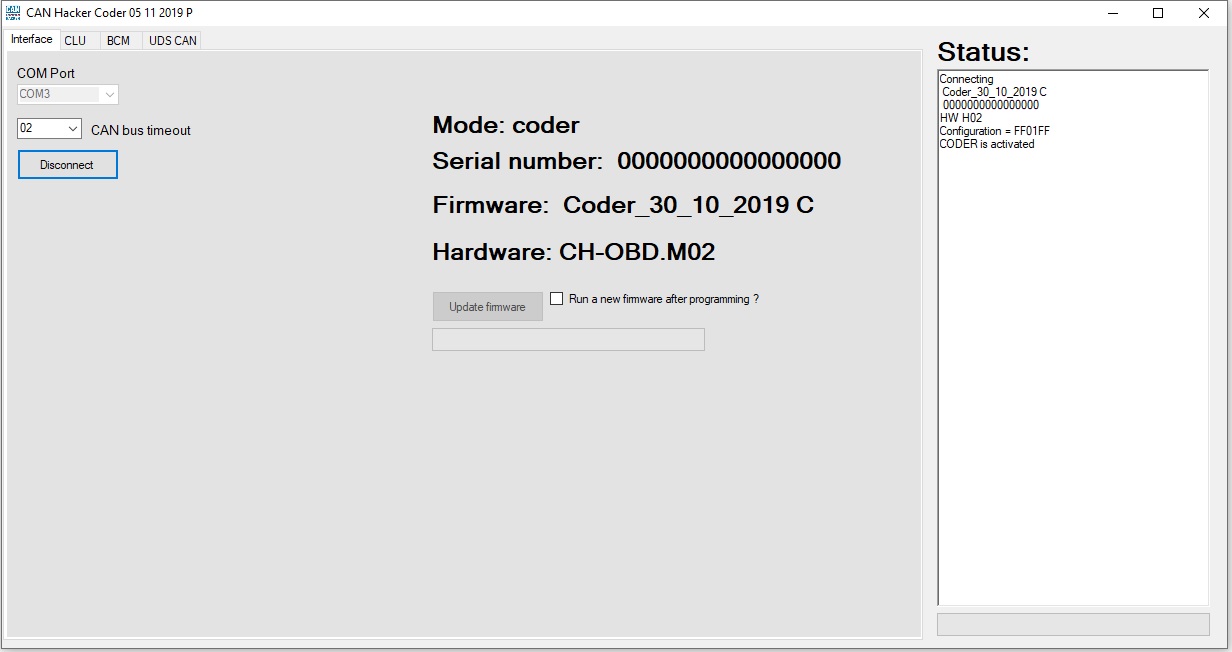 In addition, the updated version of Coder allows you to send custom CAN messages to the vehicle  and scan the exchange logs of the third-party diagnostic equipment and the vehicle.

The “Interface” tab sets the adapter’s CAN driver behavior and also provides the ability to update the firmware of the device. 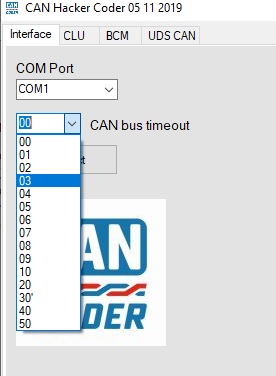 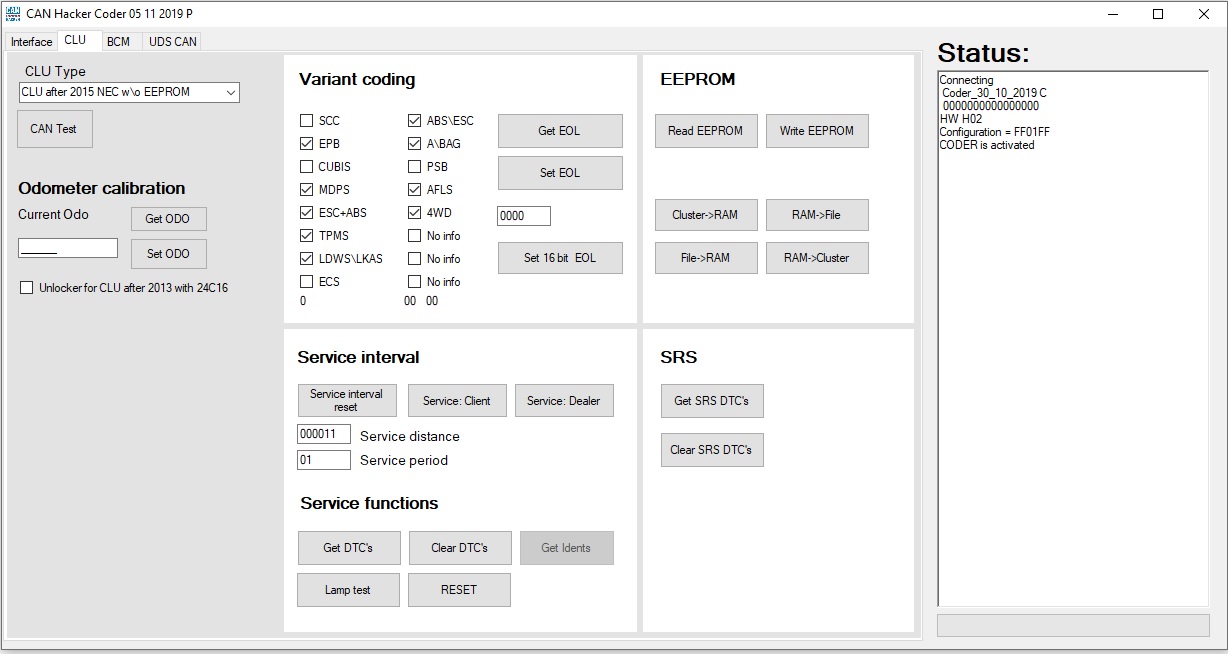 There are: instrument panel EOL variant coding tools (CLU – in KIA\HYUNDAI terminology). EOL coding options are available on instrument panels of any production. The only restriction is related to the year of manufacture of the car – different models began to support this function at different periods of time. For example, Hyundai Santa-Fe since 2013, and Hyundai Solaris and KIA Rio from the end of 2017 – the beginning of 2018.

Variant coding can be done either via the OBD2 diagnostic socket or by directly connecting to the can bus of the instrument cluster (can-C). On a number of vehicles from 2019, EOL coding is only possible when connected to the can-C bus, due to the blocking of the operation on the ICU interface side.
In order to perform EOL variant coding, press the Get EOL button to read the current encoding, and then delete or set flags in front of the required vehicle systems and press the Set EOL button.
Some vehicles may be coded from 2014 onwards, but the current EOL code reading function is not available. In this case, you must immediately set the flags against all the necessary systems and click Set EOL.

The odometer calibration function is only available for Continental \ VDO clusters, as well as for the fairly rare Yazaki instrument clusters until mid-2016 installed on KIA Sportage IV.
Operating with instrument panel EEPROM. 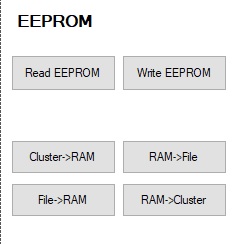 It is possible to read and write EEPROM dumps on both clusters with external memory type 24C16 and on clusters with EEPROM emulation inside the NEC microcontroller.
The Read EEPROM and Write EEPROM buttons allow you to read and write the dump directly to a file \ from a file, and the Cluster->RAM, RAM->File, File->RAM, RAM->Cluster buttons allow you to use internal can-Hacker memory as a temporary buffer. 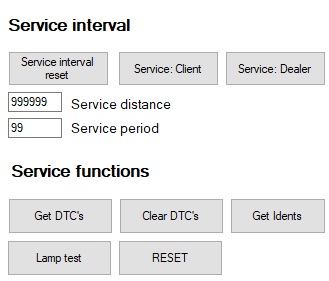 Service intervals are available on all manufacturers’ panels.
The selected service mode is activated by pressing the relevant button. In Client mode, the distance and number of months before Maintenance are not displayed. In Dealer mode, both distance and time are displayed. You can set the service parameters in the Service distance fields in kilometers and in Service period in months. 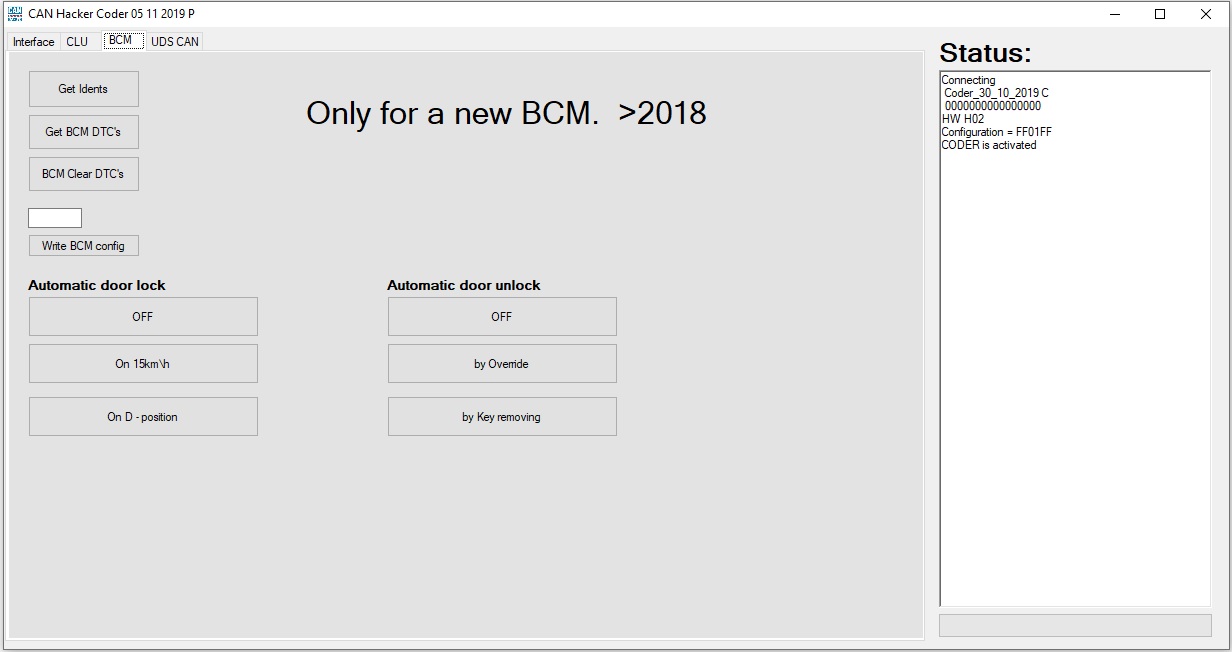 Operation of the control module – BCM is only possible if it supports can bus diagnostics. Such BCM units have been installed on premium KIA\Hyundai vehicles since the end of 2016 (for example, KIA Optima). And on cars of the class KIA Rio – Hyundai Solaris since 2018.
Since 2019, some cars have been installed with the integrated body-control unit (IBU), which has a gateway interface (ICU) that blocks the operation of the car configuration functions without providing a crypto-certificate. These units are fitted to KIA K900, KIA Stinger, KIA Ceed CD, Hyundai SantaFe vehicles from 2019. In this case, the BCM module is not currently configurable and the instrument cluster EOL programming must be carried out via the can-C bus which connects the instrument cluster to other control modules.